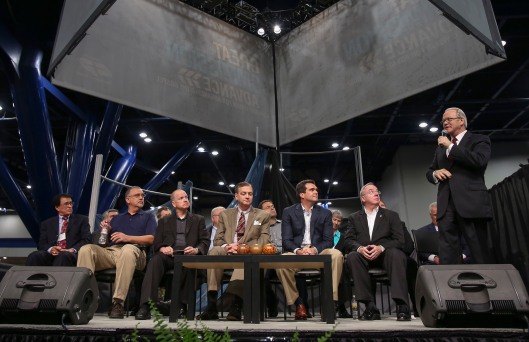 Over at Religion News Service, Jonathan Merritt has taken up keyboard and monitor to advise the Southern Baptist Convention on how to avoid a disastrous membership slump. His article is well worth a read. The SBC’s statistics guru, Ed Stetzer, announced that America’s largest Christian denomination is starting to see numbers reminiscent of the old Mainlines before their decline. It is interesting to see the largest Baptist fellowship struggle against dropping baptisms and rising abandonment. This seems unusual (at least for those within the denomination) since the SBC bucked the mainline trend by 1) recovering its seminaries (and thus its denominational leadership) for orthodoxy in the 70s and 80s, 2) holding to an exclusivist (thus inherently evangelical/missionary) view of soteriology, and 3) sacrificial church planting, with great success in reaching the burgeoning Latino community. So what is the problem now?

Merritt offers three suggestions. First, harsh in-fighting over nonessentials needs to end. Misplaced priorities regarding entertainment, political candidates, the Sinner’s Prayer, and—most recently—Calvinism have driven people out of the pews. The latter’s popularity has been fingered for the SBC’s membership plateau; however, as Stetzer’s research shows, the presence of full “5 point” Reformed Baptists makes up only about 16%  of the denomination (an increase from former studies, but a minority nevertheless). Plus, accusing Calvinists for neglecting evangelism is a fairly steep claim considering their impressive missionary track record. Merritt suggests people are leaving the SBC over noisy, stressful quibbles. He concludes, “If the Southern Baptist Convention wants to regain the credibility, interest, and relevance it has lost, the denomination must learn to put first things first. Namely, sharing the gospel through missions and showing the gospel through acts of service, compassion, and justice.”

Second, Merritt calls for an end to political partisanship. He cites several petitions the Convention issued that are clearly regrettable in hindsight. While there is a troubling nationalism to be found in cultural Southern Baptism, some may find the young writer harsh when he worries that “the denomination continues to operate like a Republican lapdog….” Perhaps this springs from the angst of being raised in the Baptist subculture. Speaking from my own experience of being raised in a Mainline church, I would have preferred most of Merritt’s embarrassments to being alienated, harangued, and scandalized for my (and my family’s) support for free markets, just war, self-defense, life, and marriage. While I was mercifully preserved from much ham-handed purity culture, I was never warned about the tremendous danger and wickedness of sexual sin from pastors and Sunday school teachers (a crueler dereliction of duty, I would argue). When looking at the intellectual resources commonly available to most Christians during the Sexual Revolution and following, it is quite surprisingly that Moral Majoritarians made it through as well as they did. Though their approach earned some stinging experiences, they should not be thrown under the bus altogether. At my own alma mater, I knew and befriended many who were burned-out culture warriors. The “take back the nation” controversies are harmful, but so too would be a complete acquiescence to nefarious social currents we see today. Many failed to keep the balance, and I expect will fail again. Nevertheless, I speak as a mellow historian/cradle mainliner, so maybe we should swing on a generational pendulum when it comes to such political issues. After all, Merritt himself has added not only life and marriage, but also immigration and environmentalism to his political dossier.

Third, the SBC needs to listen to people, especially the 18-39 age bracket. Bitter hard-heartedness has alienated the young. I defer to Merritt’s experience and judgment on that front; I was not raised nor am I currently a member of an SBC congregation. I would only warn against the American worship of youth. In the United Methodist Church, declining Westerners fawn over inexperienced young pastors and laymen (more so than the spirit of I Timothy would suggest), while Africans from vibrant conferences show deference to their wizened elders. Truth is the truth, no matter one’s age, but I must confess that I still see gray hair as a mark of honor and authority.

What I think we’re seeing is a continuation of that great American tradition, institutional disloyalty (chronicled so well in Ross Douthat’s book Bad Religion: How We Became a Nation of Heretics). When Merritt announces, “A new day is dawning in American religious life in which Christians of many stripes seem to be running fast and hard from denominations, particularly those whose behavior mirrors the descriptions listed above,” he is in error—not over the phenomenon, but over the timing. The exodus from “namebrand” Christianity—or rather, ecclesiastical structures—has been a common trend over the past forty years or more. Contemporary Americans, the atomized individualists we are, prefer our own self-defined spirituality. Nondenominational congregations and parachurch organizations fit our idea of discipleship more than “stifling” bodies that worry about orthodoxy and catholicity. Infighting and theological issues heating up during a synod? Better leave before getting too stressed out and while one can save face.

Some evacuate the SBC because of its bad PR. Popular culture—especially the entertainment and news industry—vilifies the SBC. The label is toxic–Southern Baptists have been turned into bogeymen. Some people may abandon the denomination because of its unacceptability in an increasingly liberal society. I think that Merritt would agree that Baptists and other evangelicals should not cater to this kind of preoccupation. It would create a church ready to flake out on unpopular cultural issues.

But this does point to a broader issue that the SBC needs to tackle—what kind of culture is it creating for its members and what sort of disciples are its congregations forming? To put it roughly, what should Southern Baptists “look” like—how should they act and what should they believe? How is the faith passed on to the next generation? Salvation experiences ring hollow if those involved abandon Christ’s Body; retention and growth are just as important as initial birth. How is the Church preserved? By what vehicle(s) is the person, message, and work of Jesus Christ conveyed to others? Are our individualistic, anti-family, anti-communion, anti-hierarchical sensibilities a liability in such a project? I’ll warrant that Jonathan Merritt and the SBC aren’t the only ones who need to be asking these questions.