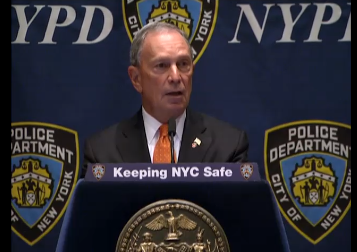 The Shoulder-to-Shoulder Campaign, an interfaith coalition allied with the Islamic Society of North America (ISNA), is praising the passage of two bills by the New York City Council aimed at stopping the alleged abuses of the NYPD. Mayor Bloomberg says he will veto the bills, even though they passed with enough support to override it.

The passed bills, the End Discriminatory Profiling Bill and NYPD Oversight Bill, outraged Mayor Bloomberg and NYPD Police Commissioner Ray Kelly. The latter bill requires the overseeing of the NYPD by an independent Inspector-General. The former opens the door for the NYPD to be sued in state court for policies that disproportionately affect certain ages, genders, sexual orientations or housing statuses.

Mayor Bloomberg considers the bills to be a matter of “life and death” vows to “not give up for one minute.”

“The bill would allow virtually everyone in New York City to sue the Police Department and individual police officers over the entire range of law enforcement functions they perform,” Kelly explained.

He said the result will be skyrocketing liability costs, the unnecessary use of resources and an overall decrease in effectiveness.

When asked about the so-called problem of NYPD racial profiling, Bloomberg dismissively said, “Nobody racially profiles.” He made perhaps the most politically-incorrect statement of his career in defense of the NYPD:

Bloomberg refuses to apologize. “The numbers clearly show that the stops are generally proportionate with suspect’s descriptions,” he said.

The bills were aggressively supported by the New York chapter of the Council on American-Islamic Relations (CAIR), joined by the American Civil Liberties Union. The ACLU has often allied itself with the U.S. Muslim Brotherhood network that CAIR and ISNA belong to.

CAIR’s chapter in New York is among its more radical ones. Former CAIR-NY director Cyrus McGoldrick has sent out tweets with anti-law enforcement rhetoric and support for Hamas, the Muslim Brotherhood and the destruction of Israel.

CAIR-NY board president Zead Ramadan refused to condemn Hamas in December 2011 and has portrayed American-Muslims as a brutally-repressed minority on Iranian state TV. Another board member, Lamis Deek, has praised Hamas, supports the elimination of Israel and claims that the NYPD has a secret alliance with Israel to target Muslims. Deek also supported the Muslim Brotherhood takeover of Egypt as a blow to American “imperialism.”

The Shoulder-to-Shoulder Campaign, an interfaith political coalition that includes ISNA as a member, celebrated the bills’ passage. ISNA is so proud of its work in putting together the coalition that it highlighted it as a crowning achievement when it met with Turkish Prime Minister Erdogan in May.

The Campaign’s members include American Baptist Churches USA, the Episcopal Church, the Evangelical Lutheran Church in America, the Jewish Council for Public Affairs, the Jewish Theological Seminary of America, the Presbyterian Church (USA), the United Church of Christ and many others.

ISNA and its interfaith allies’ fight with the NYPD reached out a whole other level when the news broke that officers had been shown The Third Jihad, which Police Commissioner Ray Kelly appeared in. The film discusses the Islamist threat to American and mentions that ISNA and CAIR are linked to the Muslim Brotherhood.

Shoulder-to-Shoulder responded by writing a writing a letter to Mayor Bloomberg blasting the NYPD and the Clarion Project, the producer of the film, for promoting a negative image of Muslims—even though the film is narrated by a devout Muslim.

In its May/June magazine, ISNA fired at the NYPD and made the Department sound like New York City Muslims are being intimidated into silence and are even afraid to pray in public. In an almost comical blow to its own credibility, ISNA’s article said “Muslim terrorism is not a threat after 9/11.”

Mayor Bloomberg doesn’t have the strongest anti-Islamist credentials, but his standing on the side of the NYPD against the CAIR-supported bill is something he should be praised for. He previously defended the NYPD when it faced an avalanche of criticism for its reasonable counter-terrorism efforts, such as investigating Muslim Students Association chapters with evidence of extremism.

Bloomberg’s veto will be overridden if none of the New York City Council members change their mind. It is up to residents to convince them not to believe the hysteria of CAIR and its interfaith allies.

This article was sponsored by the Institute on Religion and Democracy. It originally appeared on Front Page Magazine and was reposted with permission.