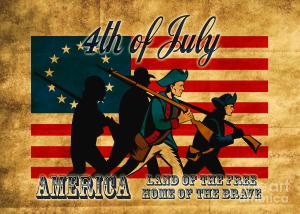 Eric Patterson wrote an excellent piece for The Washington Post last week, in time for July 4, making the case that America’s revolutionary founders were following traditional Christian Just War thinking to justify their reluctant revolt. The author of a recent book on Just War teaching (Ending Wars Well – Yale University Press, 2012), Patterson is Dean of the Robertson School of Government at Regent University and Senior Research Fellow at Georgetown University’s Berkley Center for Religion, Peace & World Affairs. I’m also honored to know him as a friend.

The Post article by Patterson is very helpful and timely because a growing number of Christian, especially evangelical, elites commonly deride justification for the American Revolution. Some of these elites are themselves pacifists or pseudo-pacifists who don’t believe in Just War teaching at all but simply deploy it as a supposed argument against any viable force. Others are anti-American and anxious to discredit the United States and its founding narrative and principles. Sometimes they hail King George III as the legitimate authority, although it’s very likely that if they were themselves British they would apologize for British imperialism. Some of this crowd seems to relish contempt for their own nation as a virtue.

Anyway, Patterson counters with a succinct recollection of the moral justifications behind the American Revolution. He cites the Continental Congress’ “Declaration on the Causes and Necessities of Taking Up Arms” of 1775, which was written mostly by the Quaker inspired John Dickinson of Pennsylvania with help from Thomas Jefferson. This lesser known Declaration asked whether God granted to government “unbounded authority…never rightfully resistible, however severe and oppressive” or is the state “instituted to promote the welfare of mankind”?

The Declaration of 1775 cited, as Patterson recounts, “seizure of property, martial law, a blockade, and now bloodshed,” persuading the Founders that their self-defense was “proportionate, last resort alternative to ‘submission to tyranny’ and ‘voluntary slavery.’” Further echoing Just War principles, they noted their chance of success thanks to likely foreign aid against the British.

Anyway, read Patterson’s excellent column for yourself. Also check out an exchange in American Spectator I had several years ago on the justness of the American Revolution with distinguished Catholic ethicist John Keown of Georgetown University, who’s also a friend.

1 thought on “Was American Revolution Just?”