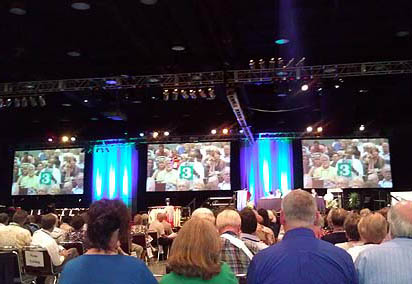 “By embracing sexual liberalism and Gnosticism,  the Disciples have further sidelined their church. Exalting Western notions of radically individual moral autonomy above shared understandings of the faith alienates many of the denomination’s own members.
-IRD President Mark Tooley

Washington, DC— The General Assembly of the Christian Church (Disciples of Christ) has joined with several other oldline Protestant denominations in embracing sexual orientation and gender identity as specially affirmed categories in the church. At their meeting July 13-17 in Orlando, Florida, the church’s governing body passed a resolution listing sexual orientation and gender identity alongside race, age and other categories to which the denomination is “striving to become a people of grace and welcome.”

The resolution also affirms the “faith, baptism and spiritual gifts of all Christians regardless of their sexual orientation or gender identity” and states that neither is “grounds for exclusion from fellowship or service within the church” but celebrated as “part of God’s good creation.” This statement implies affirmation of clergy sexually active outside traditional marriage. The Disciples have a very congregationalist polity with nearly all ministry decisions made at the local church.  So the new denominational stance is mostly symbolic.

The Disciples of Christ are the smallest of seven Protestant churches historically classified as Mainline. The denomination has lost two-thirds of its once nearly 2 million membership since the 1960s and currently lists 639,500 members. Prominent members have included Presidents Ronald Reagan, Lyndon Johnson and James Garfield.

“While the resolution calls for the ‘welcome of and hospitality to all,’ the Disciples of Christ include far fewer members than at any time in their modern history.

“The mainstream of U.S. and global Christianity still holds strongly to traditional Christian teaching upholding the marriage of man and woman as the standard for Christian sexual behavior.  Universal Christianity also rejects the Gnostic idea that “gender identity” is fluid and self-determined.

“By embracing sexual liberalism and Gnosticism, the Disciples have further sidelined their church. Exalting Western notions of radically individual moral autonomy above shared understandings of the faith alienates many of the denomination’s own members. The Disciples of Christ now follow the United Church of Christ and the Episcopal Church on the road to even greater theological marginalization, internal division and accelerating membership loss.”

The Episcopal Church’s ratification of same sex marriage at its General Convention in Indianapolis on Tuesday is the almost logical outcome of its decades long trajectory away from theological orthodoxy. It reveals a heterodox understanding of the universal church, of the Scriptures, of human nature, and of the full identity and mission of Jesus Christ. The Episcopal Church joins the even more liberal United Church of Christ in redefining marriage. Both denominations are among the fastest declining in America. That decline will continue indefinitely and maybe even accelerate.

Even more troubling is the Episcopal Church’s official embrace of transgenderism. Here is essentially a Gnostic faith that mental and emotional self-realization trumps physical reality. Each self-actualized individual can in fact perpetually reinvent himself or herself into endlessly possible new sexual identities. Male today, female tomorrow, then some yet to be determined new gender next week. The Christian hope and understanding that the human body is called to be a sacred temple of the Holy Spirit that will ultimately resurrect, as Christ resurrected, for all eternity is largely lost or ignored under the transgender ideology.

What is the ultimate ceiling or floor of this strange new course upon which the Episcopal Church is launched? Only God knows. But certainly the denomination will become even more so the preserve of largely upper income, white, liberal urbanites who have the luxury to indulge in utopian fads. The Episcopal Church was once derided as the Republican Party at prayer. Now what is it? MSNBC at prayer?

Meanwhile, the global Anglican Communion, now perhaps over 80 million strong, is thriving in most places. Once a leader in that communion, the Episcopal Church, at 1.9 million members and fast falling, absent a massive influx of cross dressing spiritual seekers, faces a sad. cloudy future, mostly dependent on the endowments bequeathed by the long deceased. Yet the Holy Spirit still lives on this earth, and He may yet reclaim what others consider hopelessly lost.