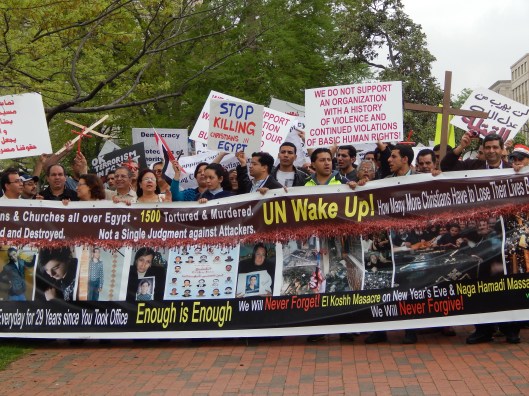 “US, wake up!” was one of the most frequent shouts heard in Washington, DC on April 18, 2013, as hundreds of Coptic Christians, other Egyptian Americans, and their supporters joined together to protest the most recent atrocities against Christians and others since Egypt fell into the hands of the Muslim Brotherhood and urge action by the U.S. government and the world community.

Signs demanding justice for victims of Islamist violence in Egypt and signs heartbreakingly depicting some of those victims shared space in the protest rally at Lafayette Park across Pennsylvania Avenue from the White House.

The rally in front of the White House was extended until busloads of participants from all over the United States arrived, and then the march began down Pennsylvania Avenue to the U.S. Capitol. Members of other people groups that have been marginalized and persecuted under Islamist supremacism joined the Copts to show solidarity.

The groups included a delegation of Christians from northern Nigeria, under constant attack by the Boko Haram terrorists who want to cleanse Nigeria of all Christians. 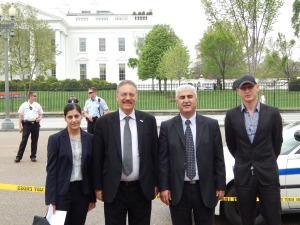 Also present were Syrian Christians — first oppressed under the tyrannical Assad regime and now facing the possibility of an Islamist takeover in Syria.

Marginalized and oppressed Sudanese from the north, from Beja land in the east, and from South Sudan participated.

And also joining was an Iranian dissident who has suffered under the Islamic regime in his country. A representative of each of these communities spoke at the rally.

En route to Capitol Hill, the protestors continued to raise their voices. They asked why the U.S. would continue to fund and supply with arms a terrorist regime. They declared that “Coptic blood is not cheap.” They demanded the ouster of the Muslim Brotherhood and President Mohamed Morsi. They plead for help to bring real freedom and democracy — not the type that came with the clueless support of Arab “Spring” — to all of the people of Egypt. One source of help would be the passage of a bill in Congress right now to create a special envoy for religious minorities in the Middle East and South Central Asia.

Whether in Egypt, Nigeria, Sudan, Iran, Syria, or any other place in the world — supremacists see all others as either second-class citizens to be marginalized and oppressed, or as threats to a pristine and pure Islamist state that need to be eliminated. These perpetrators of prejudice, violence, and evil must be faced by a united front of those who want all people to live in freedom. And such a united front is needed in order to arouse the United States and the global community. The Copts’ rally was a good starting point.