Officials from four national Muslim groups speak on the Boston attacks at a press conference Friday, April 19th at the National Press Club in Washington, D.C.

Officials representing several national Islamic groups earlier today condemned the Boston marathon bombings and asked that the public, media and commentators “not rush to judgment” about suspects’ motives and to “restrain themselves.”

The event at the National Press Club in downtown Washington, D.C. was announced shortly after it was revealed that two suspects, Dzhokhar and Tamerlan Tsarnaev, are ethnic Chechens from the Muslim-majority Russian Republic of Dagestan. A social media account of Dzhokhar Tsarnaev claims he is an adherent of Islam.

The religious views of the Tsarnaev brothers were not directly addressed at the press conference, with Muslim Public Affairs Council (MPAC) Legislative and Policy Analyst Hoda Elshishtawy merely noting that “We are hearing reports of the ethnic and religious background of the suspects.”

“Our community and faith detest and deplore the actions of these individuals,” announced Council on American Islamic Relations (CAIR) National Executive Director Nihad Awad. The CAIR official was insistent that the actions of those who planted the bombs were not consistent with the teachings of Islam. “Only those who do not know make these assertions – or those who have a political agenda to divide.”

Asked by a reporter from CNN how concerned the leaders were about people in their communities connecting with extremist teaching, Islamic Society of North America (ISNA) President Mohamed Majid replied that “every faith has within it heretical elements, we have pushed back against that.”

Naeem Baig of the Islamic Circle of North America (ICNA) thanked the media “for not jumping to conclusions,” but explained that the Muslim American community felt a burden of others doing so.

“We cannot control what is on the internet,” Baig noted in responding to a query about one of the Tsarnaev brothers following a controversial Australian-born Islamic lecturer.

“Anybody can misinterpret a text,” Awad asserted, adding that the American Muslim community “will not allow ourselves to be hijacked” by the ideologies of overseas extremists.

Asked by a correspondent from Arabic satellite TV network Al Jazeera why the Muslim groups were acting defensive by calling a press conference so quickly, Majid responded “we are not apologizing, we are condemning crimes.”

The Presbyterian Church (USA) is updating its 2010 study, ““Toward an Understanding of Christian-Muslim Relations,” which was prompted by “alarming anti-Muslim statements and actions.” The 2-million member church partnered with Islamist groups for the project and its website promotes U.S. Muslim Brotherhood entities as interfaith partners.

The listed advisors for the study include Naeem Baig, president of the Islamic Circle of North America (ICNA) and Farhanahz Eliz of the All Dulles Area Muslim Society (ADAMS) Center, a mosque led by the president of the Islamic Society of North America (ISNA). A 1991 U.S. Muslim Brotherhood memo lists ISNA and ICNA among “our organizations and the organizations of our friends.” ISNA was labeled by the government as an unindicted co-conspirator in the Holy Land Foundation trial and U.S. Muslim Brotherhood entity.

Another advisor was Ghulam Haider Aasi of American Islamic College. The chairman of the board of trustees is Dr. Ekmeleddin Ihsanoglu, theSecretary-General of the Organization of Islamic Cooperation. Its advisory board includes Ahmed Rehab of the Chicago chapter of the Council on American-Islamic Relations and Kifah Mustapha of the Mosque Foundation. CAIR and Mustapha are also unindicted co-conspirators that were listed as part of the U.S. Muslim Brotherhood’s Palestine Committee. The president of the Mosque Foundation, Oussama Jamal, is also on the advisory board.

The study’s bibliography cites Tariq Ramadan, the grandson of the Muslim Brotherhood’s creator; Dr. John Esposito, one of the top allies of the U.S. Muslim Brotherhood network and Ingrid Mattson, former ISNA president, described by the authors as an “excellent and readable scholar.” She is also on the International Institute of Islamic Thought’s Council of Scholars, another group mentioned in the 1991 memo.

The Presbyterian Mission Agency’s “interfaith links of interest” include CAIR, ICNA, ISNA and the Muslim Public Affairs Council (MPAC), a group founded by Muslim Brotherhood ideologues that has opposed the designations of Hamas and Hezbollah as Foreign Terrorist Organizations.

An e-mail sent to an address on the Presbyterian Mission Agency’s website was not returned.

The Presbyterian Church (USA) also whitewashed Imam Zaid Shakir and Zaytuna College in a book it published titled, “The Search for Truth About Islam: A Christian Pastor Separates Fact from Fiction” by Reverend Ben Daniel. The book “explores what he calls ‘the American cult of fear,’ particularly as it relates to the rise of Islamophobia in the United States.”

The book says that Zaytuna College, which Shakir is a founder and co-chairman of, is “filling an important niche in American higher education.” The reader is not told about his history of extremism, which includes preaching that a new Caliphate is needed to wage jihad with “weaponry against the enemies of Islam.” Instead, readers are left with the impression that Shakir is a living rebuttal to all the negative stereotypes that moderate Muslims must contend with.

What begins as an interfaith partnership often becomes a political partnership. In July 2012, the Presbyterian Church Office of Public Witness and other Christian groups came to the defense of ISNA, MPAC and Huma Abedin, the State Department appointee with Islamist links. The Presbyterian Church was offended that Rep. Michele Bachmann and four other congressmen had raised concerns about the Brotherhood links of these organizations and individuals.

The Presbyterian Church (USA) and its Islamic interfaith partners have also made common cause when it comes to Israel. The Church almost voted in favor of divestment from Israel last summer, winning praise from the director of ISNA’s Office of Interfaith Relations, Sayyid Syeed. He was previouslyrecorded in 2006 saying, “Our job is to change the constitution of America.”

The revised study is scheduled to be presented during the 221st General Assembly in 2014. The current version states that Presbyterians are called to “identify and speak out against bigotry, prejudice, discrimination, and violence against Islam and Muslim peoples of all cultures, especially in the United States.”

This may be a laudable goal, but we’ve seen how these groups use “Islamophobia” as a weapon against their critics. When Rep. Bachmann and her colleagues confronted these groups, they responded by deploying the Presbyterian Church and their other interfaith partners. They were criticized as paranoid and bigoted.

The Islamists want to make the church their “Islamophobia” police and undermine American-Christian support for Israel. And they are making progress.

This blog post originally appeared as an article at FrontPage Magazine. 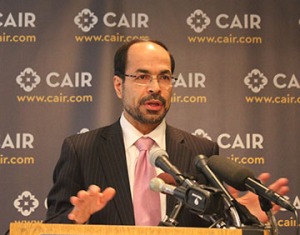 Add the Council on American-Islamic Relations (CAIR) to the list of Religious Left organizations snapping up ad space on Washington, D.C.’s mass transit system this week. The Muslim advocacy organization announced a new slate of 16-foot banners designed to counter ads sponsored by the American Freedom Defense Initiative (AFDI). The AFDI ads read: “In any war between the civilized man and the savage, support the civilized man. Support Israel. Defeat Jihad.”

The AFDI ads, maintains CAIR Executive Director Nihad Awad, promote an “atmosphere of anti-Muslim hate” for using the word “savages”. AFDI Executive Director Pamela Geller counters that the ads are intended to be pro-Israel, and that calling for the defeat of violent extremists is fair game.

CAIR has frequently been at the center of controversy: the Department of Justice named the council an unindicted co-conspirator in the Holy Land Foundation terrorism trial. According to CAIR spokesperson Ibrahim Hooper, 127 coalition members, including Jewish Voice for Peace, have lined up against the AFDI ad campaign.

“It’s not just CAIR and the Muslim community,” Hooper noted. Other groups – including the United Methodist Women’s Division (UMW) plan to announce their own ads in the coming week.

The AFDI ads have already stirred controversy in New York and San Francisco. The Washington Metropolitan Transit Authority (WMATA) had attempted to stop or delay the AFDI ads, only to have a U.S. district judge last week order the ads permitted on free speech grounds.

Awad debuted CAIR’s ads, featuring a smiling young Muslim girl alongside a reading from the Qur’an stating “Show forgiveness, speak for justice and avoid the ignorant,” at a Friday press conference held at the council’s Capitol Hill headquarters.

At sixteen feet wide, CAIR’s banners will easily dwarf the AFDI ads they are designed to counter.

“Civility needs to be reintroduced in the public discourse,” Awad asserted, adding that those behind the “Defeat Jihad” ads were a “small group of activists, experts in misinformation.”

While Israel went unmentioned at the press conference, Awad waved about a report from the liberal think tank Center for American Progress entitled “Fear, Inc.” which he claimed contained facts that “there is an orchestrated campaign” to create “an atmosphere of fear” against American Muslims.

“The best industry in America today is to write something against Islam and you will be able to make money,” claimed fellow press conference speaker Naeem Baig, Vice President for Public Affairs of the Islamic Circle of North America (ICNA).

Islamic Circle official Naeem Baig charged that the use of the term “savages,” as in the AFDI ad, was always inappropriate.

“Anyone has the right to free speech – even bigoted and hate speech and the like,” Baig stated, but added that the AFDI ads were designed to “provoke and stigmatize” Muslims and that the word “savages” was the problem. Asked by a reporter if the term “savages” could be legitimately used to describe those who use violence to perpetuate an extremist cause, Baig restated that the term was inappropriate to be used against any group.

“Pamela Geller has a routine,” charged Hooper, who called the relatively small AFDI ad buy an attempt at free publicity. Asked by a reporter why CAIR did not simply ignore the ads, Hooper replied that the group had to respond and counter Gellar’s “voice of hate.”

The CAIR ads will appear in three of the four metro stations where AFDI has already purchased space. A fourth station, Takoma Park, did not have any remaining ad space available, and the group is looking for another station to substitute, as well as funds to expand the campaign. The ads will run for one month.

IRD’s press release on the controversy can be viewed here.