That’s the line from Sr. Simone Campbell and her co-author, Richard Trumka, in their new op-ed, “Don’t fall for the false choices on immigration”. This line of thought is starting to sound familiar, with similar rhetoric coming from the Evangelical Immigration Table and other activists like Jim Wallis and John Carr. The line is the same, no matter how it’s phrased: Christians don’t have a choice about whether or not they should support amnesty. No matter what their conscience or reason tells them, this is what Jesus would do. Anything else is antithetical to Christian charity and the Biblical commandment to love thy neighbor.

Sister Simone Campbell is, of course, the Executive Director of NETWORK, the lobbying group behind the Nuns on the Bus. The Nuns on the Bus’ latest tour is promoting the current immigration bill which is being considered on the floor of the Senate. Richard Trumka is the President of the AFL-CIO, a man who helped repeal the AFL-CIO’s ban on Communists in the organization’s leadership, and has, in the past, encouraged violence on the part of its members.

The op-ed claims that “a great country can’t claim to be a beacon of freedom and opportunity while separating immigrant parents from their children and exploiting workers.” Well, this country doesn’t separate parents from their children: a border does. A border crossed by the immigrants themselves. The greatest moral failing of the United States is, arguably, the failure to enforce immigration law, allowing Mexican elites to ignore social problems in their own country, sending their discontented poor across the border in order to send money back to the home country. One wonders why this incredible moral catastrophe on the other side of the border is being ignored, while American elites are placed under enormous pressure to pay for Mexico’s policy mistakes.

One of the most least credible parts of the op-ed is Campbell and Trumka’s claim that they “stand on the shoulders” of Cesar Chavez. Chavez’s position on illegal immigration changed over the course of his life, but for much of it he stood in radical opposition to the lawless practice, primarily because he was an advocate for low-income workers. In 1969 Chavez led a march to the Mexican border in protest of illegal immigration, and in 1979 he testified before Congress on the issue:

“I do not remember one single instance in 30 years where the Immigration service has removed strikebreakers to the extent the workers were helped and the illegal alien workers were removed. The employers use professional smugglers to recruit and transport human contraband across the Mexican border for the specific act of strikebreaking, rampant in the strikes of the last 30 years. Lawbreaking begets more lawbreaking, and when these illegal aliens come in to break a strike they have to be harbored; they have to be transported; and labor contractors have to be used to direct them and supervise them…The Immigration and Naturalization Service steadfastly refuses to enforce the law; not only that, but then they get into a dispute with us because we call their shortcomings to their attention.”

The fact is that there are reasonable arguments on both sides of the Senate immigration bill, and that Christians can have a variety of positions on immigration, amnesty, and border control. This campaign from the left to guilt trip Christians into feeling obligated to support amnesty is growing tiresome. 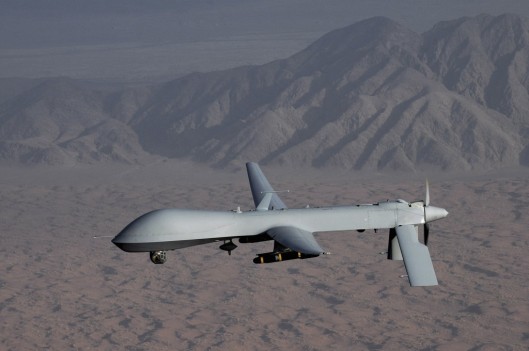 Washington, DC—A letter to President Obama from United Methodist, United Church of Christ, Quaker, Brethren, and Christian Reformed officials, plus the head of “Nuns on the Bus,” is expressing “great concern” about drone “targeted killings” of “alleged” al Qaeda militants.

The groups want to repeal the post 9-11 “Authorization for the Use of Military Force” and instead pursue “police actions” that “extend protections consistent with principles of human and civil rights pertaining to the pursuit and apprehension of a criminal suspect, including fair trial in a court of law.”

A full version of the letter can be viewed by clicking here.

“These activists bemoan ‘remote, technical warfare,’ without admitting they, as literal or functional pacifists, oppose all warfare and force. Their appeal illustrates how some church officials, ignoring their own religious teachings about fallen humanity, want desperately to pretend that the world is intrinsically benign and just.

“These religious activists are interested in the ‘root causes of conflicts,’ which they surmise can be addressed by ‘restorative justice practices, and effective economic development programs.’ Their suggestion has merit if Islamist terrorists have legitimate grievances that can be redressed by rational recompense. But what if their mollification entails accommodation to Islamist rule and practice, including the suppression of civil liberties, which the activists profess to champion, and the suppression of non Islamists?

“The liberal Protestants’ letter seems to expect a level of perfection and power that not even the U.S. at its very best can possibly attain.

“Technology and modern scruples have made war and law enforcement more precise than ever before. But churches attuned to the limits of human capacity must understand that states, when defending the innocent from the murderous, must act boldly, stealthily, dangerously, and without guarantee of absolute success. Winston Churchill reputedly said: ‘The maxim ‘Nothing but perfection’ may be spelled ‘Paralysis.’’ High minded theorists may demand moral precision, but no government this side of heaven can guarantee it.”

The Nuns on the Bus, who rose to mediocrity last year with a bus tour denouncing Paul Ryan’s “Path to Prosperity” budget plan, have returned to tell America their thoughts on immigration. The Nuns on the Bus is a project of NETWORK Lobby, a 42-year-old left-wing lobbying group that identifies itself as Catholic, but that has ties to the progressive, Soros-funded group, Faith In Public Life. NETWORK says that their mission is that of “lobbying, organizing and educating for a nation and world rooted in justice.” You may recall that Sister Simone Campbell, who is the Executive Director of NETWORK, gave a speech to the Democratic National Convention last year as well, attacking House Republicans and Governor Romney, then candidate for President. In that speech, she claimed to stand both with the Catholic Bishops and with President Barack Obama, though she was in fact quoting committee chairmen at the U.S. Council of Catholic Bishops, not the opinions or statements of the bishops themselves. Before her speech, on the floor of the convention, when asked by a reporter whether or not abortion should be illegal, Sister Simone responded: “That’s beyond my pay grade. I don’t know.”

Sister Simone’s implicit endorsement of pro-choice politicians, of course, violates the teaching of the Church not to participate in intrinsic evil, and brings public scandal to the faith.  She belongs to the Leadership Conference of Women Religious (LCWR), a group censured last year by a Doctrinal Assessment by the Congregation for the Doctrine of the Faith, which found that the group had “serious doctrinal problems.” One of those problems is their yearly conference, which has grown increasingly bizarre in recent years, and which the Assessment said exhibited ““radical feminist themes incompatible with the Catholic faith”. One of the suggestions made in the Doctrinal Assessment was that women religious leaders ought not to be associated with NETWORK Lobby, or groups like it. Pope Francis has reaffirmed the findings of the Congregation and is continuing the call for reform. Sister Simone, however, has stated that she believes that the censure “has always been about politics.”

Sister Simone is a political activist first and foremost, and a useful mouthpiece for the progressive left, particularly when used as a Catholic to attack the Catholic Church. However, this time around on the bus, she may appear to be on firmer ground; many prominent members of the Church, clergy and lay, have voiced their support for immigration reform, and spearheading the Gang of Eight’s Senate bill is conservative, sometimes Catholic Marco Rubio. But while Sister Simone and her ‘nuns’ (who are not ‘nuns’ at all) refuse to take hard positions on the Catholic non-negotiables (abortion, homosexual marriage, etc), they spend their time promoting causes which they pretend are non-negotiable. Care for the poor, for example, is a Christian mandate, but there are reasonable disagreements to be had about the best way to care for the poor, and the role of government in that activity. Immigration is another such issue; there are defensible views that Catholics can hold on both sides of the immigration question.

There seems to be a great deal of confusion, some of it intentionally caused by groups like NETWORK, about whether the Church ought to lay down judgments about political matters. Of course, the Church can and ought to say that murder is wrong and that charity is right, because those are dogmatically true things. But C.S. Lewis considered this question years ago:

People say, “The Church ought to give us a lead.” That is true if they mean it in the right way, but false if the mean it in the wrong way. By the Church they ought to mean the whole body of practicing Christians. And when they say that the Church should give us a lead, they ought to mean that some Christians — those who happen to have the right talents — should be economists and statesmen, and that all economists and statesmen should be Christians, and that their whole efforts in politics and economics should be directed to putting “Do as you would be done by” into action. If that happened, and if we others were really ready to take it, then we should find the Christian solution for our own social problems pretty quickly. But, of course, when they ask for a lead from the Church most people mean they want the clergy to put out a political program. That is silly. The clergy are those particular people within the whole Church who have been specially trained and set aside to look after what concerns us as creatures who are going to live forever: and we are asking them to do a quite different job for which they have not been trained. The job is really on us, on the laymen. The application of Christian principles, say, to trade unionism and education, must come from Christian trade unionists and Christian schoolmasters; just as Christian literature comes from Christian novelists and dramatists–not from the bench of bishops getting together and trying to write plays and novels in their spare time.

Regardless, the Nuns on the Bus have chosen immigration as their issue du jour. On the official website for the “Nuns on the Bus” is a friendly endorsement from Senator Dick Durbin, author of the original Dream Act, and member of the Senate Gang of Eight, who are behind the current amnesty bill. Sen. Durbin, who claims to be a practicing Catholic, is a hard-line pro-choice politician, and has been denied the sacraments by his home parish.

The very nature of this issue is giving way to an insidious development: their ongoing immigration bus tour is giving the Nuns on the Bus a platform with which to reach faithful Catholics, Catholics who may not know the heretical ties of the organization. It is giving the Nuns on the Bus face time with Catholic leaders and blessings of some priests and bishops, the very bishops they defied last year. Whatever the true intentions of Sister Simone and her ‘nuns’ may be, it ought not to be forgotten that NETWORK is first and foremost a liberal lobbying group, deeply intertwined with other progressive activist organizations and used by left-wing politicians to push their agenda.