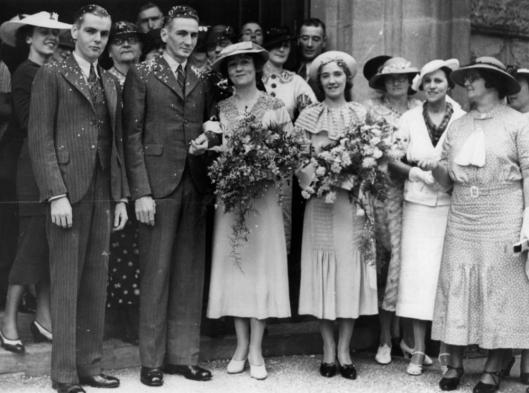 Jillian Kay Melchior authored a worthy article over at the National Review Online in which she most righteously skewers the American wedding industry. Bridal gowns that could make royalty blush with envy, artificially jacked-up prices for catering and other party staples, massive puff-publishers of magazines and other media, facility difficulties, over-the-top expectations, tremendous expense: it’s all there. Most crucially, Melchior observes how this proves to be not only a pricey annoyance, but a truly onerous burden on young newlyweds just starting out in the world.

The article concludes, “America’s blinged-out weddings come at a time when marriage is, statistically speaking, on the decline…Perhaps Americans hold excessive weddings as a counter-reaction to marriage’s decline: As American marriages come undone, the wedding becomes overdone.” Perhaps.

However, this line of questioning can also reveal some troubling trends. We’re seeing not only a breakdown of marriage after the ceremony, but also before. I refer, of course, to premarital sexual ethics. Let’s be frank, shall we? Lots of newlyweds have already been either fooling around or cohabiting. What does this mean for the nuptial event itself?

It means that the wedding doesn’t mark the entrance of man and woman into the community as a new family (which will produce children and enjoy the process thereof). What, then, does the event become? A display of economic stability, or, as the NRO article here puts it, another high school reunion. It’s a gaudy show that indicates to family and friends that the couple is “really really committed,” even though they’ve already exhibited a stunning lack of sexual commitment for their spouse. Indeed, for concupiscent and virtuous newlyweds alike, the nuptial service has become an opportunity to simultaneously broadcast images of normalcy and unique individuality to the world.

Which gets us to another problem: an often-unwitting egotism. Excessive individualism is in the American air we breathe. Part of that means an abandonment of tradition, even in an event that marks entrance into mankind’s oldest known institution. Old American (typically Protestant) weddings were often derivations of near-medieval liturgies, especially as presented in the Anglican Book of Common Prayer. The famous vows said at the altar are straight from the venerable Order of Matrimony. In fact, in its primitive form, the Western wedding is a Eucharist service, in which Christ is the ultimate focus. As such, matrimony is not really centered on the couple itself and thus is not necessarily a proper stage for self-expression. The tradition laid down limits on personal preference.

Now no more: couples write their own (often cloying) vows, present slideshows, and get their friends to participate in a musical talent show to celebrate the happy occasion. Of course, there’s nothing wrong with making the Big Day special, but if we’re honest with ourselves, we can’t help noticing that modern weddings can tend towards self-indulgence.

Speaking of the churchly nature of many nuptials, a final troublesome issue makes for an inhospitable marital landscape: religious and geographical displacement. The death of active, common church life cannot be understated. It’s a lot easier and cheaper to get facilities, manpower, and other resources when the couple is already a part of a congregation. But we don’t entrust the church and hardly the family with our weddings; instead, we turn to various businesses for space and catering. Obviously, building size and other constraints can be an issue, but how many couples in our increasingly unchurched age are really involved in parish life and thus care to get their brethren involved in their romantic festivities? This does not mean that Christians must react with increased potlucks in the fellowship hall (a motion I would not oppose as I am a lover of pillow mints and Little Smokies). It does raise the question of the changing landscape of American marriage and the Church’s responsibility to instantiate a flourishing community of fruitful pilgrims.

I speak as a spectator of many weddings, each quite different (save the Book of Common Prayer and Roman Catholic ones); I may one day have to eat my words. But I do challenge readers to seriously reconsider the hyped-out, consumerist liturgy that is the Modern American Wedding. Maybe it’s time to lay aside our variations on the Disney princess fantasy and realize that marriage—before and after the vows—is much more than the glossy magazines and Instagrammed perfection.